Maps are a supremely satisfying, intuitive way to understand the world—something about connecting information to a sense of place, in context of where we live or what we think we know about our surroundings, is remarkably powerful. Though we tend to expect maps to be purveyors of location-based truths, that's for sure not the only way to experience them. 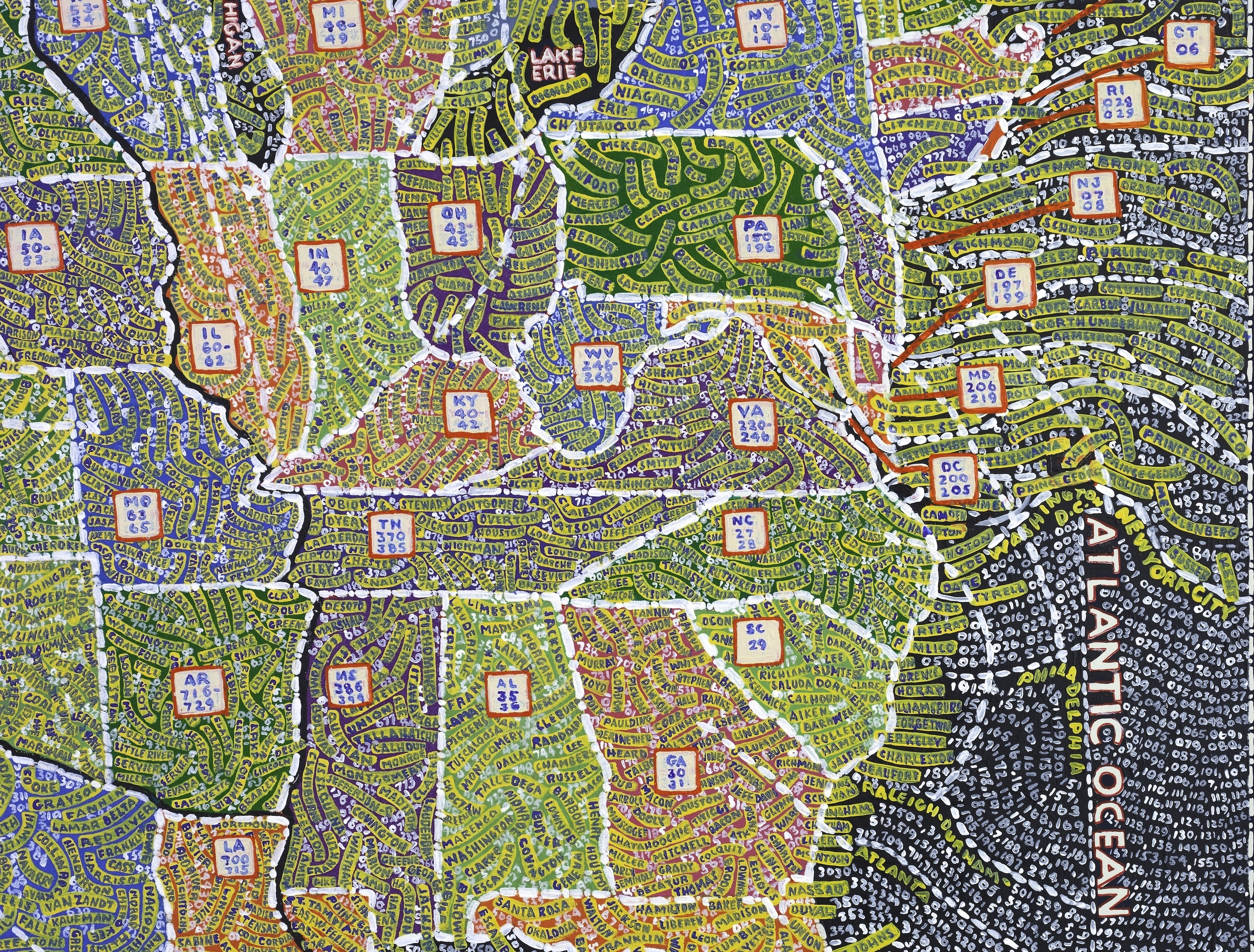 For Paula Scher, a graphic designer and longtime partner at design firm Pentagram by day and obsessive map painter the other half of the time, maps aren't necessarily a way to convey literal information, but an opportunity to evoke emotions and deeper thought. Scher's latest show, U.S.A.—featuring 10 U.S. maps frenetically painted through provocative lenses like population demographics, extreme weather, real estate prices, and more—has deliberately touched down during a presidential election year. And they're the kind of maps that really get people talking.

Scher has been painting these maps of "abstract expressionist information" for over a decade, and they've been the subject of exhibitions, limited edition prints, and a book. The new U.S.-focused series, in progress since 2014, came out of Scher painting on top of previous works and recognizing how different information overlaid on a U.S. map drastically changes the aesthetic and emotional character of the piece.

There are 10 in total: two large full-wall pieces (which took three to six months each) and 8 smaller ones (each taking about two months.) Scher painted each work while consulting 6 to 10 other maps, consciously calibrating and constructing the information in a way that creates aesthetic value and poses important questions. Here's a closer look at a few of them.

While producing the map of counties and zip codes above—one that Scher is especially "pleased with aesthetically"—she was continually struck by the population and political implications of what she's painting. She pondered, for example, how the fact that the vast majority of the population lives on a small portion of the land affects the American political system. Scher specifically points out Wyoming—which compared to states like California, feature a relatively sparse landscape of zip codes on the map, yet enormous voter power in elections.

This map of demographics and economic information is one of the more territory-oriented pieces that allows Scher to ruminate on why people think the way they do. She explains in a phone interview, "Illinois is an interesting state because you think of Chicago and how progressive it is...Then the southern part is really right up next to Kentucky and it isn’t." She says, all of a sudden, there would many follow-up questions: "What's going on in that state? How are they thinking politically? What is it like to live there? What are the communal rules? How do they get along?"

The map of extreme weather above is a good example of how Scher paints by feeling, presenting information based on how she's "moved by it" rather than the specifics of the data. Compared to typical weather maps, this depiction details the cities (and implicitly, the populations) affected by the floods, droughts, etc.—with the most severely affected places highlighted in circles. The result is a striking image with added resonance and urgency.

This map of median home prices, adapted from Trulia's real estate heat map, is the only one in the series that takes a more literal approach. Instead of having to zoom in and hover on an area to see the sales figure, as you would on the interactive map on the web, this piece unleashes all the numbers all together—which is at once overwhelming and incredibly easy to understand.

At the gallery, guests often jumped right into a game of "find the most expensive city," looking to usual suspects like New York City and San Francisco. If they look to the left of S.F. and turn their heads sideways, however, a potential winner emerges: Palo Alto, California, with a staggering $4,900,000. Folks also talked about San Antonio being "a good deal," or how much their own homes are or were worth.

Though these maps are clearly colored by Scher's own opinions and biases, they are also stunning starting points for people to suss out their own experiences and narratives. A large installation at the gallery entrance, featuring the line work extracted from one of the large maps about interstate highways, hovers over the space like a pulsating heart, with infrastructure for veins and arteries. And among visitors, it was a sure-fire catalyst for road trip discussions.

Stuck-at-home artists are turning their walls into murals

The Icehotel is back with rooms full of gorgeous, weird ice sculptures

View all stories in Art