What the heck is a bumwad?

Everything you need to know about your home, from securing a mortgage to painting your living room.

Architecture boasts a language all its own. From construction terms to office tools to lofty lingo like "spatiality," it’s easy to feel left in the dark if you lack an architecture degree. To help avoid confusion and head-scratching, here’s a comprehensive list of the most important words to familiarize yourself with before you sit down and chat with your architect. Before you know it, you’ll be discussing everything from tectonics to building envelopes like a pro.

BIM: BIM stands for "Building Information Modeling." It’s a 3D model-based process that architects use to reduce errors and help the client envision a project. It digitally helps them plan, design and construct buildings and infrastructure.

Building envelope: A building envelope, also referred to as a building skin, is the physical separator between the interior and exterior of the building. The envelope includes things like walls, floors, roofs, fenestrations, and doors.

Built environment: It’s been formally defined as "the humanitarian-made space in which people live, work and recreate on a day-to-day basis." So basically, it’s the spatial and cultural environment that we have built for ourselves.

Bumwad: It’s the thin sheet of tracing paper architects use to make a quick sketch of a building detail. If you’re wondering about the term, it refers to the paper’s likeness to a cheap sheet of toilet paper.

Cantilever: This term refers to any type of beam that’s only anchored at one point. Architects often refer to cantilever when discussing overhanging planes, like a cantilevered roof or deck. For a good example of this building style, think Frank Lloyd Wright’s Falling Water.

Charette: This term is often thrown around in architecture school. In the late 1800s, at the Ecole des Beaux-Arts in Paris, students who needed to rush their designs to their instructors sent off their drawings on a cart known as a charette. Today, the term has broadened to mean any intense, short-term design project, or an intense, on-the-spot design effort.

Cladding: Building cladding is the application of one material over another to add an extra skin or layer to the building. It could be any material—wood, metal, stone, vinyl—but the cladding must be waterproof because it’s primarily used to protect the building against leaking.

Context: Much like a building needs the right scale, it also needs to be built in context. This means that the building suits its surroundings in style, materials, and proportion. A glass skyscraper rising on a block of low-rise, brick townhouses, then, would be referred to as "out of context."

Corbel: A piece of stone, wood, brick or any other building material that projects from the face of a wall. It’s generally used to support a cornice or an arch. The name comes from the French word meaning crow, since the corbel has a beak-like shape.

Cornice: Derived from the Italian word meaning "ledge," a cornice refers to any horizontal, decorative molding that crowns a building.

Curtain wall: The curtain wall is typically defined as a thin, aluminum-framed wall that contains in-fills of glass, metal panels, or a thin stine. The framing is attached to the building structure, so it doesn’t carry the floor or roof loads of the building. It gets the name ‘curtain wall’ because it’s much like window curtains, hanging from a supporting framework.

Diagram: This is a drawing that will outline, explain, or clarify different elements of the building as it relates to the whole design. It’s not necessarily drawn exactly to scale.

Facade: The facade is essentially the face of the building, the exterior that looks out onto a street or open space.

Fenestration: It’s a blanket terms for the design, construction, and presence of any openings in a building. Think windows, doors, vents, wall panels, skylights, curtain walls or louvers.

Finial: It’s the decorative ornament found on top of a building’s roof, spire, gable or canopy. It’s a common addition in Gothic architecture, where the fleur-de-lys is often used as the ornamentation.

Floorplan: A floorplan refers to the actual layout of the building, with dimensions, notes, and any other details needed for construction.

Floor plate: A floor plate is a physical object—essentially a metal plate—that’s set into a floor and sometimes fitted with slots that allow for equipment to be fastened in.

Juncture: This is how different materials intersect, which ultimately influences how the building will age or if any maintenance issues will come up. If the juncture between the building siding and a window isn’t correct, it’ll cause leaking. 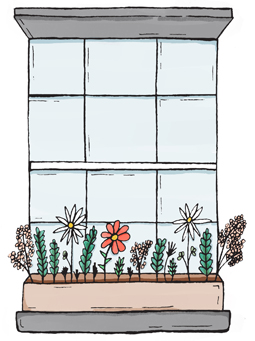 Louver: A window blind or shutter with horizontal slats angled to let in light and air, but keep out the rain, direct sunshine and noise. Usually the angle of the slats is adjustable.

Massing: The general shape, or shapes of a building, as well as its form and size. You could compare it to the overall composition of a painting, but in this case it’s three dimensional.

Parti: It’s the basic scheme or concept for an architectural design that’s represented in a diagram. Parti is short for "parti pris," French for "to make a decision."

Program: "Program" is a word architects throw around a lot as it refers to your big-picture project. When an architect asks, "What’s your program?" they want to know your wish list—a description of what you want out of a project and what you’re willing to pay for.

Scale: Scale can refer to a few things. For one, it’s a triangular, ruler-like device used to determine dimensions. But more often, you’ll hear architects use the term in a statement like, "The scale is all wrong." In that case, scale refers to how the sizes of different architectural elements relate to one another.

Spatial organization: Architects, unsurprisingly, think about space a lot, and there’s plenty of language to go along with it. Spatial organization refers to organizing a series of spaces into one recognizable whole. Then there’s spacial unity, where architects look for a series of spaces to read as a whole. Spatial thinking refers to your perception of relationships between empty space and objects. And spatial definition means using the elements of design to make spaces recognizable and separate from one another.

Spatiality: A general term that refers to anything relating to, involving, or having the nature of space.

Sustainable/green building: Sustainability is a term that’s becoming more and more prevalent in architecture. A green or sustainable building refers to the structure, and the processes related to the structure, that’s environmentally responsible and energy efficient. Environmental factors are taken into account from the initial designs to the construction, as well as the operation and maintenance of a building, to any renovation or demolition.

Tectonics: This is the process of shaping, ornamenting, or assembling materials in the construction period. Simply put, tectonics is the art and science behind a building’s construction.

Truss: A truss is the supporting structure or framework that’s composed of beams, girders or rod, usually made of steel of wood. Its shape usually looks like the triangle, as it’s the frame that supports the building’s roof.