The traditional conception of a law school usually conjures up visions of ivy-strewn walls, stuffy libraries, and elaborate Classical architecture. Prestige, it suggests, can not only be passed on, but perhaps absorbed, and top-flight institutions, such as the Harvards and Yales of the world, should stand apart as beacons of higher learning and enlightenment.

When Arizona State University began examining how to redesign and reinvent its Sandra Day O’Connor College of Law, the faculty and administrators decided, in the words of Assistant Dean Tom Williams, that "we’re not going to create any more marble or ivy." Instead, the school opted for radical openness, a vision for a progressive new model for legal education championed by Dean Douglas Sylvester. When the institution officially opens the Arizona Center for Law and Society in downtown Phoenix next week, it’ll be making a big, $129 million bet that the future of legal education is a lot more open, engaged, and transparent.

"We wanted a building that isn’t closed off to the public," says Williams. "Law is a big part of your life, a big part of the life of this country, and we want to people to understand more about how it works."

Designed by Tomas Rossant of Ennead Architects in collaboration with Jones Studio, the six-story, 280,000-square-foot facility looks like a courtyard building that’s been "cracked open." Wrapped around a central core that’s open to the public, the building creates a massive atrium and living room that invites dialogue, interaction, and collaboration, including space for a number of community law firms, think tanks, and nonprofits. Looking a bit more tech campus than college campus, it serves as a physical manifestation of the school’s philosophy towards openness and engagement and literally invites the public inside.

"This is one of the most permeable, open, and accessible university building ever built," says design partner Tomas Rossant. "We kept pushing to create a building with an incredible amount of surface area between the city and the institution. We see it as a mechanism to connect to the urban and social fabric of Phoenix."

According to project designer Brian Masuda, the exterior serves to invite the city inside. A landscaped mall runs through the site, which was formerly a parking lot, connecting it to the street, and a canyon slices through the structure itself, connecting it back to the expansive open courtyard while showcasing the double-height spaces that form the heart of the institution, including the great hall and library. Even when inside the new building, the street never seems far away.

The library and great hall form the communal heart of the institution. Stripped of the traditional maze of stacks, the library offers an open, flowing, and borderless space. The great hall, filled with expansive open seating, is considered the "legal living room," and features a transformable layout that can be turned into an auditorium and even a public courtroom. Outdoor walkways connect many of these spaces and offer additional circulation paths, while the hallways that ring the interior offices are wide and spacious. Students, clients, and guests are meant to feel like they’re inhabiting space, not merely cutting through on their way somewhere else.

Community engagement also gets a boost with the addition of outside clinics and legal groups, which help improve a different kind of circulation within the institution. Just 70 percent of the building’s space is taken up by the law school; other tenants include the McCain Institute for International Leadership, the Sandra Day O’Connor Institute and the ASU Alumni Law Group, a nonprofit educational law firm. Having these think tanks and community clinics share space with students will give them new opportunities for cross-discipline learning and engagement with real-world issues and the everyday practice of law ( a think tank in the building is already examining issues surrounding the Zika virus and the legality of quarantines).

"We’re trying to create something more than a law school," says Williams, " a space that creates a more nuanced and open discussion." 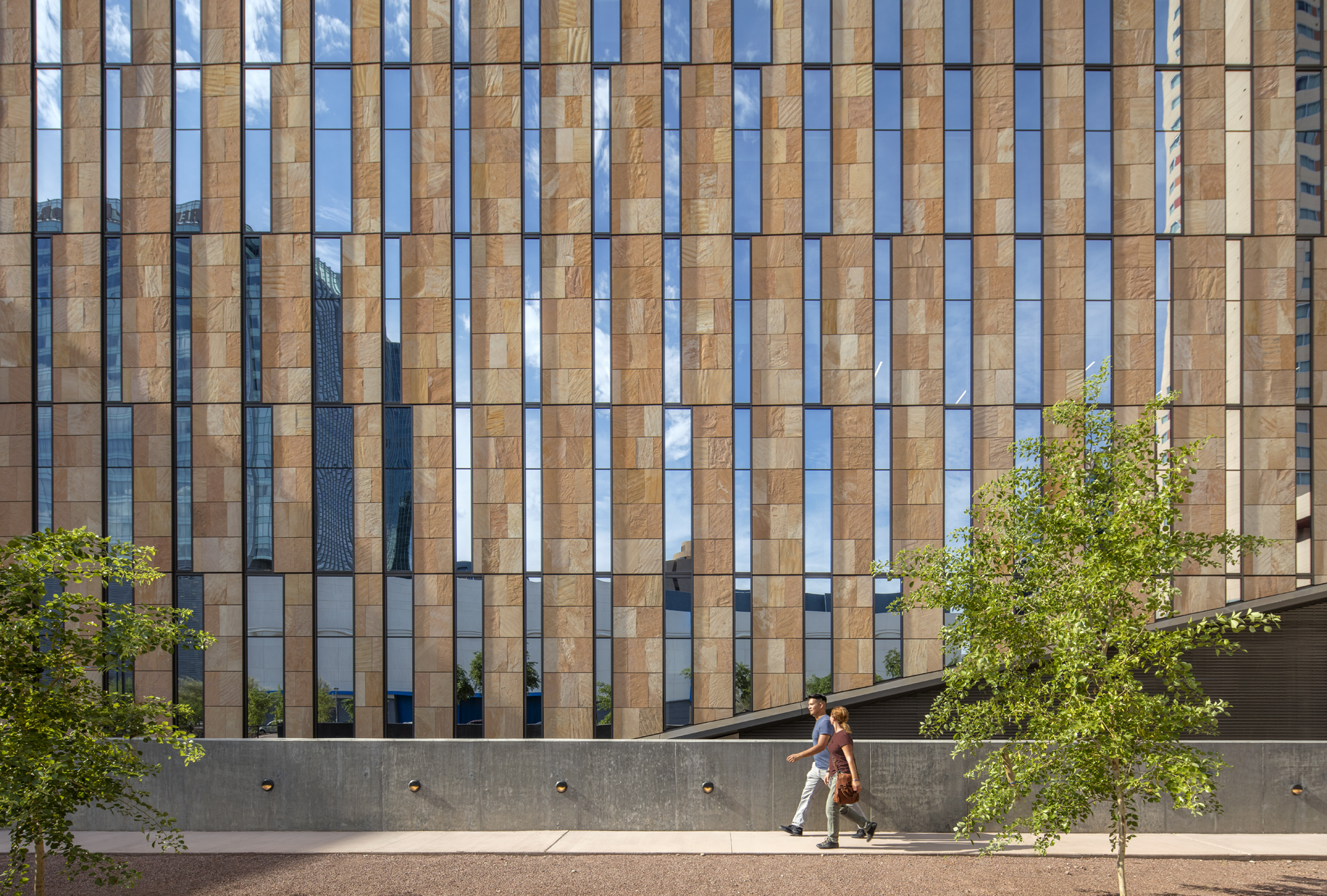 The exterior facade of Arizona sandstone, glass, and aluminum help cut down on heat gain.

The atrium and open courtyard concept certainly make more sense in a city such as Phoenix, where favorable weather during the majority of the year make outdoor access more pleasant. But the desert heat also presented a challenge for the design team, especially in terms of sustainability. The answer builds around the living room idea, created a central, shaded space. The core helps provides shade while funneling wind into the atrium, while the facade of local sandstone, aluminum, and glass limits sun exposure. Fins built into the exterior, along with chilled beams displacement cooling, help combat the heat gain of the punishing Arizona summers.

Dean Sylvester and campus leaders had been considering the idea of constructing a downtown campus for a long time, but it took the post-recession woes of the legal profession to inspire some of the building’s bigger shifts. According to Williams, the wave of layoffs that came after the recent economic downturn led to a moment of self-reflection, both for firms and lawyers as well as the educational world. How can a law degree become more relevant?

Part of the answer was closer collaboration and community engagement. Williams says that where law school traditionally foster an individualistic, competitive atmosphere, in contemporary practice, there are few situations where a case doesn’t require a team of lawyers and other professionals working together. ACLS hopes their new physical facilities reflect this ongoing shift in educational philosophy.

Technology is also adding another layer to the school’s emphasis on communication. An opt-in app developed in partnership with Unified Field, my ACLS, works with a series of beacons place throughout the building to help people find friends, and start conversations around conferences and legal questions. The opt-in technology gives users a snapshot of current events, legal news, and who happens to be working and studying in the building as soon as they enter. For instances, attendees at a conference on property law can list specialities in their profile, helping related professional connect.

"The app just builds on the idea of the school as a borderless place," says Rossant. "It’s just another example of how technology and design can help expand the classroom."

Next Up In Architects