Embracing color in the Mill City

Every week, our House Calls feature takes you into homes with great style, big personality, and ineffable soul. Today, we visit the suburban Minneapolis home of photo stylist David Anger and his husband Jim Broberg. Anger has decorated the home in the happy and (perhaps deceptively) colorful style that has graced the websites and catalogues of Crate & Barrel, CB2, Target, and more.

Let’s be clear about one thing: David Anger and his husband Jim Broberg both love style and midcentury modern design, but Anger brings his work home with him (and vice-versa) to the 1,200-square-foot space they share. "My mother, who was very witty, visited us for the first time, and she entered our home and turned to Jim and said, ‘Now, let’s see the closet that David let you decorate.’" Anger, a self-described style hound, has had a way with furniture and objects since he was a young child, and his mother knew it.

Anger may be primarily responsible for the look of their townhouse that generates happy-making endorphins, but perhaps it’s a shared love of midcentury style that brought the couple together. 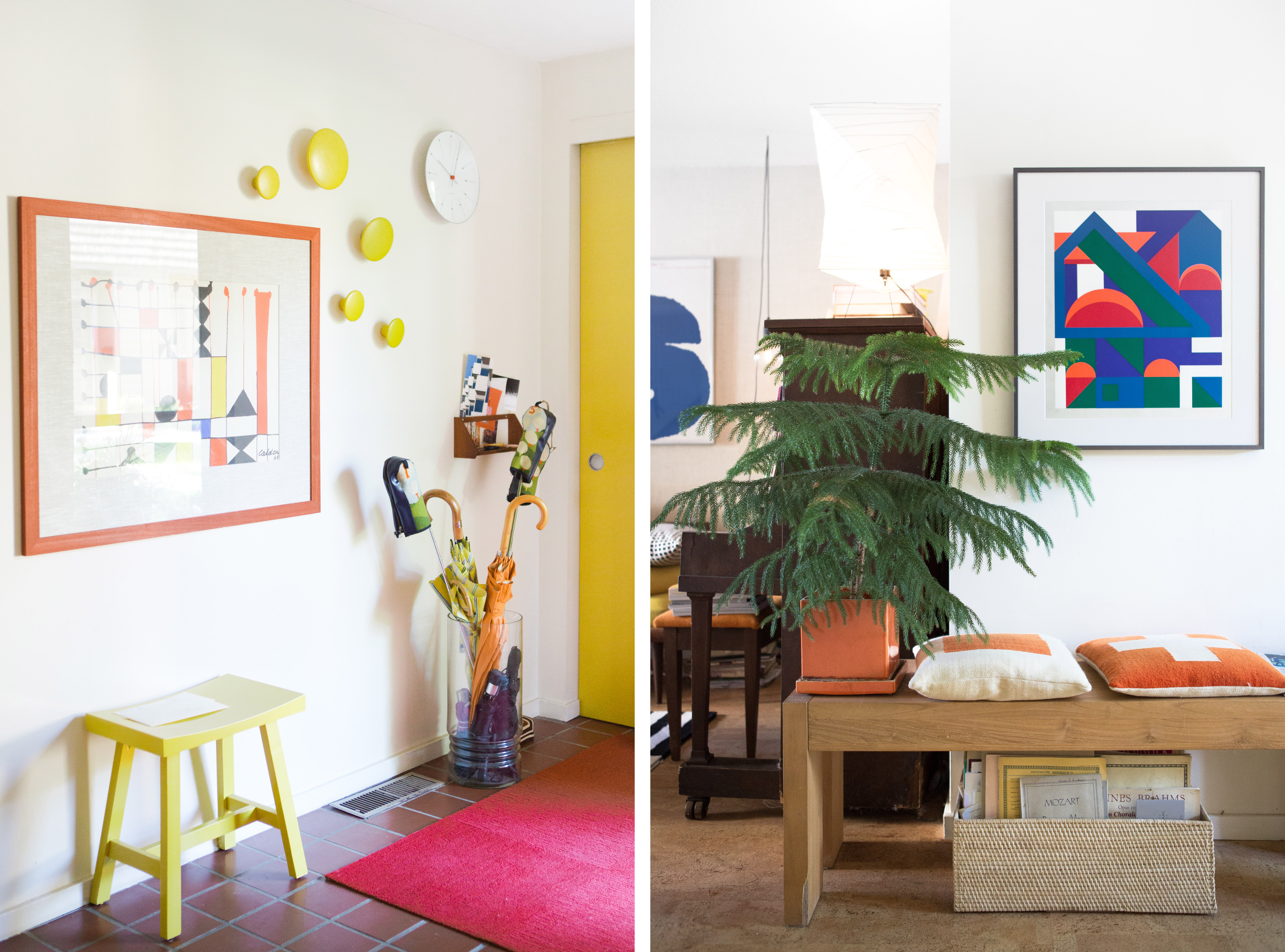 Left: Stylist David Anger admits to having a "thing" for yellow, so he painted the backside of his entry door and a stool from Target with the sunny hue. Right: Anger uses sculptural plants throughout his home. "I was inspired by the Eames house, and how they had something like an indoor garden," he says. "I thought: 'I could do this.'"

"Years ago, back before Craigslist, I was looking for a roommate in City Pages, the alternative newspaper in Minneapolis," he says. "Someone placed an ad looking to share a place with a person who loved modern Danish style. I was interested, but it sounded like he was looking for a partner. A year later, I went on a date with Jim, and I realized that he must have placed the ad—and it turned out he had."

It’s that common aesthetic that sends the men to Copenhagen on a yearly trip that’s part vacation and part shopping jaunt, and there’s plenty of evidence of their journeys at home.

They’ve lived here for a decade, after they discovered the Southdale condominium complex in Edina, right outside of Minneapolis. It was built in 1956 as housing for employees of a nearby mall. "It’s just a few blocks away from the nation’s first enclosed shopping center," Anger says. "It was built by the Dayton family, who famously founded Dayton-Hudson and later Target. They were, and are, something like the Medicis of Minneapolis. They wanted employees to be able to live near where they worked. Both Jim and I knew it was the right thing for us when we approached the front door."

Anger started by painting the background Linen White, a Benjamin Moore color. Then, over time he added accent walls—a linen wall covering here, a pleasant orange there. "Accent walls can be so 1990s, but in this place they work," he says. "We needed to add some sort of interior architecture. A painted wall is a small thing, but it does the trick."

He layered in the couple’s collection of graphic (as in design) art. The works largely rely on typography, iconography, and bold fields of color. "I think we love it because it tells a story," he says. "I also think that during the darker Minneapolis seasons, the pale background and bright colors make the space seem lighter. To me, it feels light all year round."

Asked if he would describe his style as colorful, Anger hesitates. "I’ve always liked color, I am an Aries," he says. "But really, it’s a white interior with several small bursts of color."

Given the couple’s shared style inclinations and frequent travels, it’s no surprise that MCM furniture plays a starring role. Anger’s claim as an early-on design freak when it comes to modern furniture is proven by his living room sofa story. He’s a Minneapolis native, and as a child, he openly admired his neighbor’s Danish sofa.

Years later, when he was an adult, they gifted it to him. Clearly, his youthful expression of design envy made an impression. "It’s a wonderful, custom piece," he says. "I reupholstered in in yellow fabric because I have a yellow thing."

When the men moved in, the kitchen was the only area that didn’t have an Atomic Era vibe. In fact, an earlier remodel had left it with quite the opposite feeling: something more akin to Colonial. The couple remodeled it with new white cabinet doors, white Corian countertops, and, of course, a shot of yellow in the island.

The statement copper range hood was original to the home. "The concept was to add as much shine as possible to an otherwise small, dark space," Anger says. "It now has that 1970s, Virginia Slims look."

Notably, there’s a human-scale kitchen sink, a rarity in an era when washtub-sized vessels are in vogue. The Smeg refrigerator, compared to what you find in many cooking spaces, is petite. For this couple, countertops and prep space are a higher priority.

"Kitchens with appliances large enough to survive the Armageddon drive me crazy. We actually downsized the existing refrigerator for something smaller. In my opinion, one or two people simply don’t need things that large," he says. "I may not be a great cook, but I’m an expert at arranging prepared food on a plate."

Given the list of clients on his website, it appears Anger is an expert at arranging most anything. You have to wonder: Does his life influence his work? "Oh god, yes—definitely," he exclaims. "Each job involves interpreting a brand’s vocabulary and sensibility. That said, I have a certain graphic, tidy style that I live with at home that I bring to my work."