In a Green Acres move, a couple says goodbye to city life

Every week, our House Calls feature takes you into homes with great style, big personality, and ineffable soul. Today, we visit the Fayette, Missouri, home of Derek and Jamie Bryant. Five years ago, the couple left their life in the city to return to Derek’s family’s farm. When it came to agriculture, they had big ideas and little experience, but with a lot of work and determination, they made the land and the old house on it come alive again.

From the front porch of the Bryant home, you can see the long gravel path that stretches to the public road. From time to time, you can also see chickens in the yard and cows in the pasture.

When Derek and Jamie Bryant met and married, they were far from farmers. They lived in a loft in downtown St. Louis; Derek was a commercial construction manager and Jamie was an interior designer. "It never occurred to me to garden or grow food," Jamie says. That changed after they joined a Slow Food group, and began to consider how the contents of their plate got there.

The interest grew into something of an obsession. "We planted a large garden at our house, and started raising chickens," says Jamie. "We were definitely heading in a farming direction, when we got the news about Derek’s grandmother."

Derek’s grandparents owned a 300-acre farm close to Columbia, a portion of the acreage their ancestor, Federal Walker, had claimed in an 1812 land grant. It contained a farmhouse, which started life as two log cabins. Derek spent many happy days there as a child, and he faced a decision that would determine whether his daughter would have the same memories.

"My grandmother had been living on the place by herself, but with her health starting to slip, her daughter (my mother) and I had a choice to make: Would we sell it, or keep it? We decided to keep it, that we needed to keep it," Derek says. "But then the question became how to pay for it, and who would live there. Jamie and I decided to give it shot."

But for it to be a decent shot, they would have to change the farming game. "We knew that the farm couldn't survive and provide a living for us if we continued to farm the land conventionally with crops and chemicals," Derek says. "We wanted to both preserve and improve the land for future generations of our family. We were married in a restored river mill, and that planted the germ of an idea." 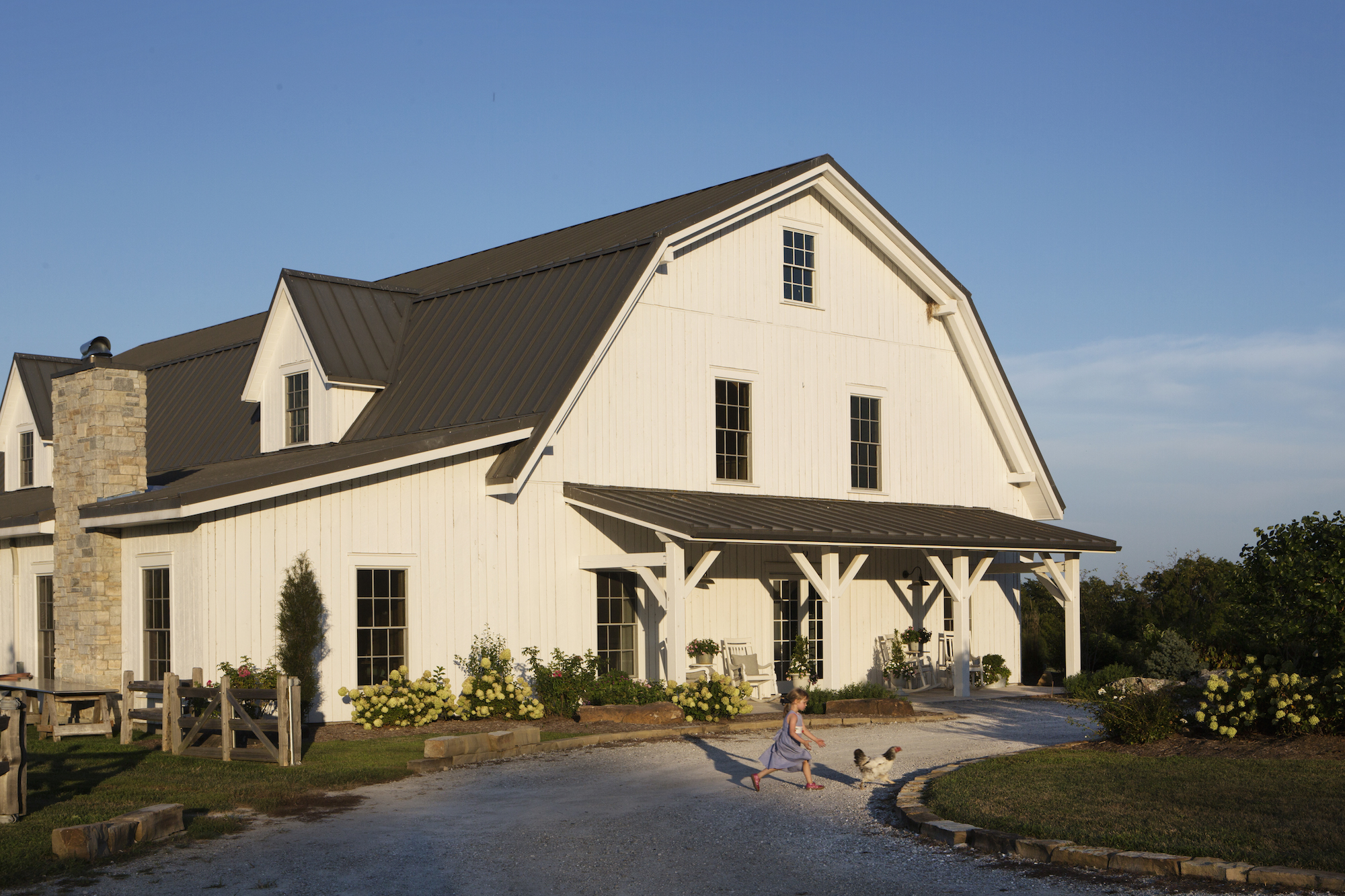 Building an event barn was key to the new path the Bryant's envisioned for the farm. The building is new, but the form is classic. On any given weekend, you might find a wedding party in front, but here four-year-old Lillian plays her own game of chicken.

In the simplest form, the plan was this: Build an event barn that could handle weddings, meetings, and gatherings of all kinds, while growing organic vegetables and raising grass-fed, free-range animals that could provide food for the guests. Believing they could make it work, they moved into the log structure Derek’s family had occupied for seven generations and rechristened the outfit Blue Bell Farm.

One of the first orders of business: remodeling the bathrooms. The Bryants chose a new style that references a classic farmhouse style.

By this time, Jamie had completed an internship at a local farm. The experience was enough for her to lay aside her designer’s tape measure, fabric swatches, and paint deck and pick up the hoe (although she did continue to work with some clients). After several months, Derek left his job and joined her. "We quickly realized we had bitten off a lot," he says. "There’s quite a bit of difference between gardening at home and growing for market."

The couple’s zeal was likely their saving grace, but it was also something of an obstacle. "We were so excited that first spring, we planted more than we could keep up with," Jamie says. "There were so many rows of beans, weeds took them over before we could get to them. We planted 600 tomato plants. Back then, we didn’t have experience with mechanical weeders or drip irrigation, so we did all the weeding and watering by hand. I could spend five hours working on the tomatoes alone."

The fields weren’t the only thing they were finessing; they were also growing a barn. Working with architect Paul Fendler of Fendler & Associates and Heather Garrett of Heather Garrett Interior Design, they designed a structure that looks like a traditional, gambrel-roofed barn in a children’s storybook, but works like a modern bride’s dream. "We did our homework," says Jamie. "We asked wedding planners what would be ideal, what couples need and want, and we included those things."

That means it appears to be a hay barn on the outside, but the inside is light, bright, and outfitted with a modern kitchen and bathrooms. Livestock might not be completely comfortable in this structure, but wedding parties are flocking to it. By year’s end, they will have hosted 55 weddings. Jamie was running a more personal design project: Making the house a fit for the next generation (daughter Lillian was born in 2012).

This was no ordinary farmhouse. When Federal Walker cleared a spot on the land and used the wood to make two cabins, he joined them by a dog trot. Over the years, the breezeway was enclosed and Victorian siding and trim was added sometime in the 1850s. "At that time, a log exterior was considered to be ‘hillbilly,’" Derek says.

But behind the Victorian facade beats a pioneer heart. In the entry, living room, office, hallway, and master bedroom, the original logs were visible, and Derek’s grandparents worked hard to preserve and restore them. "The white lines you see, that’s called chinking," says Derek. "Back in the day, my relatives probably mixed horsehair with clay to seal the space between the logs, which ranges from two to four inches. My grandparents used something that’s more like drywall." 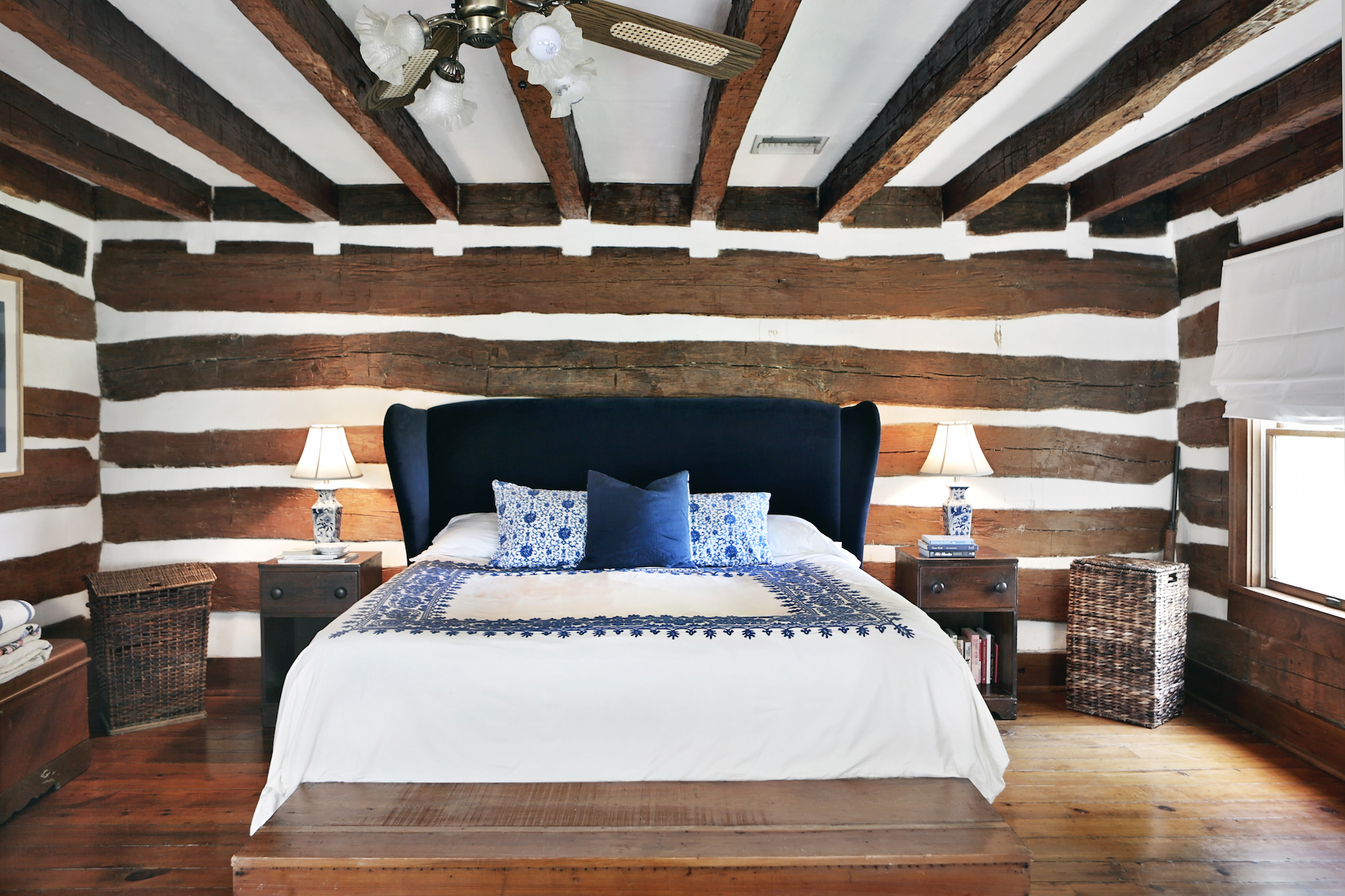 The strong, horizontal lines created by the chinking between the logs posed a design challenge for Jamie. She met it by using a simple blue-and-white palette. The headboard is from Restoration Hardware, the duvet is from Coyuchi.

The timbers weren’t the only legacy earlier generations left behind. "I was accustomed to starting design projects with more or less a blank slate," says Jamie. "That wasn’t the case here, the house was full of antiques and memories that were important to Derek and his mother. To be honest, changing it made me a little nervous."

The project became a process of editing and working with the strong wall pattern. "I found that more neutral palettes work best, so I stayed away from busy prints and went with a simple blue-and-white in the living room and the master bedroom," Jamie says.

Some of the antiques have been stored, allowing the pieces left behind to shine. New upholstery and paint (some of the rooms had been drywalled long ago) brought a cohesiveness to the home. "It made a world of difference," says Jamie.

Editor markup for House Calls: Fayette, Missouri. This is only visible in the story editor.

One thing that remains in place is a massive armoire downstairs. "It’s my understanding that it has always been here, that Derek’s family built it when they cut down a tree in front of the house," Jamie says. "Pieces like that, you just can’t change."

Holding on to the family legacy has helped both Jamie and Derek in their transition from city dwellers to a farm family. "I think about the people who were here before me, and it’s humbling. We are so lucky that this place survived—it hasn’t been blown away in a tornado, it hasn’t burned, it hasn’t been broken up by family squabbles," says Derek.

"I look at the old photos, and I feel the presence of the people who lived here, and I think about how hard they worked. I feel like the steward of this generation, and I hope I leave it in good and profitable shape for my daughter, the next generation."