The rich history and fantastic theaters of Graven & Mayger, a forgotten architecture duo

At the intersection of 13th Street and Michigan Avenue in Chicago’s South Loop there stands an art deco building with strong vertical pillars and textbook, streamlined organic ornamentation. No plaque marks the building, and the city’s online database identifies it only as an office building from the 1920s by Graven, A.S.

It’s the only reference to the work of this particular firm in the Chicago Historic Resources Survey, a 10-year effort to catalog important buildings. In a city overflowing with iconic, turn-of-the-century skyscrapers and high-rises, it doesn’t draw much attention. But it’s far from the firm’s only work, in the city or elsewhere. A 24-story office building still stands at 100 N. LaSalle Street, festooned with the same ornamentation as its cousin in the South Loop. Another stands nearby at 232 S. Wabash, noted in the survey but unattributed. They’re relics of a firm that had a brief, shining run designing palatial buildings across the country in the early 20th century.

Anker Sverre Graven was the principal of an eponymous architectural firm when it was located at 100 N. LaSalle. He had originally founded a firm with his longtime partner, Arthur Guy Mayger, in 1926, and the pair went on to design a string of fantastic theaters across the United States.

For the most part, their work stands forgotten. If not for the interest of a former colleague, a little luck, and the recent discovery of the firm’s forgotten archives, much of Graven and Mayger’s architectural work might have gone unnoticed, or unrecorded, just more building from the early 20th century by unknown architects that have been lost to time.

Images from the lost Steubenville, Ohio, commission of Graven & Mayger, one of the firm's final projects.

The duo had worked together for about a decade at the great firm of C.W. and Geo. Rapp and, according to Graven’s son Peder, were responsible for at least a portion of the design of the famed Chicago Theatre. Eventually, the two decided to strike out of their own. Their new firm, Graven & Mayger, attracted a former colleague, Edward W. Rupinski, a draftsman who would save and store all that remains of the firm today.

Among Graven & Mayger’s earliest commissions was the original Fisher Theater, the jewel of the $35,000,000 Fisher Building in Detroit designed by Albert Kahn and Associates. A competition was offered for the theater that was to be its crowning touch, costing between $1.5M and $2M alone and containing 2,800 seats, and Graven & Mayger won the commission, a huge break that helped establish them as theater architects across the country.

"In offering competition to a number of architects, Fisher Brothers announced that the theater design accepted must be entirely different from any other in the country," announced the Chicago Tribune. "With the huge assortment of Roman, Greek, Spanish, Italian, Persian, Egyptian and other standard styles already in use, the Chicagoans had something of a problem to find a novelty. However, the Maya Indians of the Yucatan peninsula generously provided the inspiration and the new showhouse will have for its motif the bizarre adornments of that ancient race."

The interior of the original Fisher Theater in Detroit

Around the same time, the two were able to snare a commission for their largest and most prominent surviving commission, the previously mentioned structure at 100 N. LaSalle, a 24-story office tower once known as the "Lawyers’ Building." Located across from Chicago City Hall, it replaced the six-story Merchant’s Building, constructed immediately after the Chicago Fire of 1871. The building cost $3,000,000, and when it was built in 1928, it set a new speed record for the construction of its steel frame, taking just over seven weeks, or 36 working days, to erect, smashing the previous record of 10 weeks.

"It’ll be an attractive looking building viewed from other skyscrapers as well as from the street," wrote the Tribune’s Real Estate Editor Al Chase in September of 1927.

But Graven & Mayger weren’t finished that year. They also designed the Alabama Theater in Birmingham, a Spanish Renaissance and Baroque style structure with a seating capacity of 3,000 as well as retail and office space. When it opened in December of 1927, it was the largest and most opulent theater then constructed in the state.

Graven & Mayger’s streak of high-profile commissions continued in 1928. They designed an annex to Knoxville, Tennessee’s Burwell Building to house the nearly 2,000-seat Tennessee Theatre. Designed in a Spanish style with Moorish influences, the entertainment edifice was the first public building in the city to feature air conditioning.

They then designed the now lost Minnesota Theater, a 4,000-seat monster in the Twin Cities. When it opened, it was the fifth largest theater in the entire country, a French Renaissance masterpiece featuring a three-story grand lobby embellished with marble and an enormous crystal chandeliers, all based upon the Sainte-Chapelle at Versailles. It’s exterior was clad in various shades of white terra cotta, and topped by a domed tower with decorative polychromed terra cotta, which was illuminated at night. 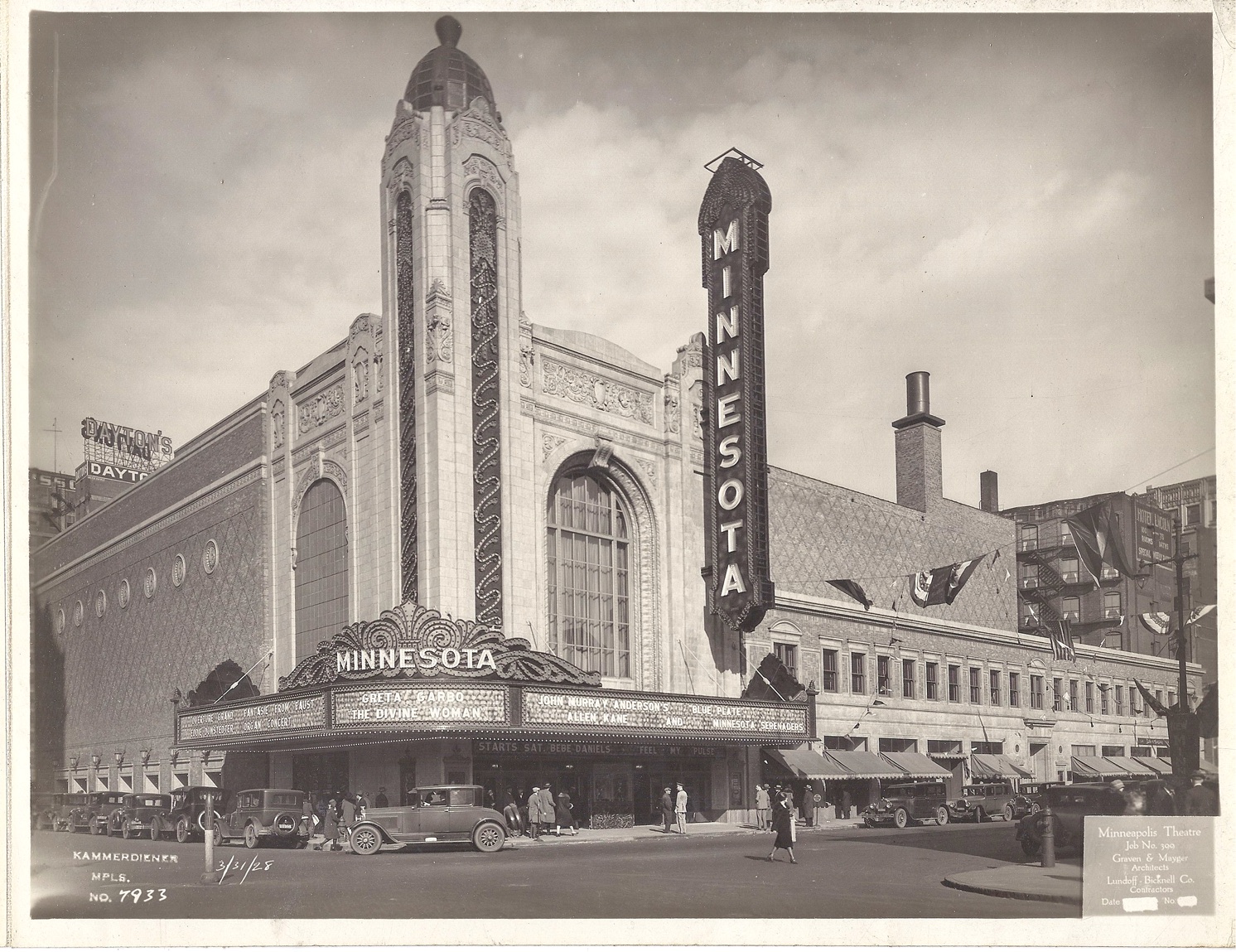 If that’s not enough, the firm also worked on the Leland Tower in Aurora, Illinois, which still dominates that city’s downtown. At twenty-two stories high, it was then the tallest building in Illinois outside of Chicago, boasting a high-class hotel with a top floor ballroom known as the "Sky Room." The architects described it as "a modern adaptation of the Italian Romanesque style," according to the local historical society

But as soon as the duo had gained momentum, the partnership had split, and both architects went their separate ways in 1930. No information on the split is really available, besides Peder Graven’s vague sense gleaned from his mother of irreconcilable personal differences, and little is known of Mayger.

Going forward, the firm was simply known as, A.S. Graven, Inc. Architects. Paramount Pictures hired the firm to design of the earlier-mentioned Art Deco Film Exchange Building (1930), that still stands at the southwest corner of Michigan Ave. and 13th St. in Chicago. They also executed three theaters for the chain in 1931, one in Asheville, Kentucky, another in North Platte, Nebraska, and the third, now lost, in Steubenville, Ohio.

In October of 1932, Anker Sverre Graven, went duck hunting and drowned. After the tragic duck hunting incident that killed Graven, Rupinski was left the unenviable task of winding down Graven’s firm and helping with funeral arrangements. A group took sleeper cars on the Chicago North Western Railway Co. to Menominee Oct. 20, 1932, where the body was interred. Graven left behind wife, La Verne and his then 4-year-old son Peder.

Rupinski found work around Chicago before ultimately passing away in 1961. His close friend Morris Henry Hobbs, the draftsman responsible for much of the ornamentation of the the Mayger & Graven buildings, would go on to a noted career as an artist, with two one-man shows at the Smithsonian in his lifetime.

The projection room at the Minnesota Theater

In the ensuing years, many of the firm’s buildings were demolished or disfigured. The lobby of 100 N. LaSalle bears scant resemblance to the original design. Aurora’s "Sky Room" was gutted and converted to apartments. The grand Minnesota Theater was demolished. The firm’s focus on movie palaces, while undoubtedly lucrative in the days before television, meant that as tastes and culture changed, buildings that required substantial upkeep were doomed.

Of their buildings that survived, many ultimately were listed on the National Register of Historic Places, but the architects themselves were often simply noted on a form or in a single sentence.

Rupinski left the firm’s remaining records, photographs, renderings, plans, even invoices and plats, in his home in Chicago, where they remained to be discovered more than 50 years after his death. Graven, of course, is little remembered today and Rupinski is completely forgotten, likely due to the timing of the firm’s formation and its sudden collapse due to the untimely death of its principal.

Eileen Gray gets her due with in-depth retrospective

View all stories in Architects