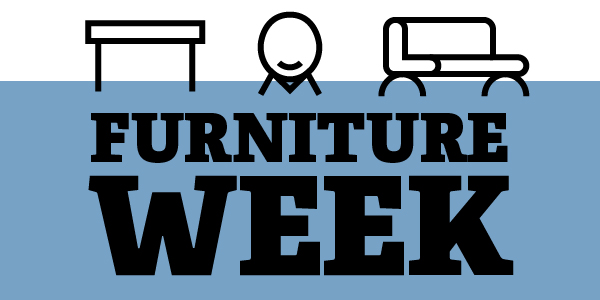 Ever the confident architect, it’s not surprising that Frank Lloyd Wright thought he knew better when it came to interior furnishings.

As Wright’s history of custom furniture and built-ins—seating and storage “built into” the walls of his buildings—suggests, he felt his design schemes would be marred by cheap, mismatched commercial pieces. To create total works of art, artists needed total control (which Wright, who consistently spent entire Sundays afternoons rearranging the living room, according to one of his sons, freely exercised).

“The most truly satisfactory apartments are those in which most or all of the furniture is built in as part of the original scheme considering the whole as an integral unit,” he wrote in 1894.

As a young architect working out of offices in downtown Chicago, fresh from his stint with Louis Sullivan’s firm, Wright was already thinking about buildings as total works of art, where every element, from the exterior shell to the interior, was connected. Throughout his career, his furniture design was inexorably linked with his greater philosophies about design and architecture: His archives would eventually contain more than 300 sketches of different chair designs.

That belief steered him toward interiors and furniture, which he began to collect early on. He obtained pieces from estate sales in Oak Park and other nearby Chicago suburbs and bought pieces at Marshall Field’s, the famous downtown retail giant. Even before he had the success and salary to sink great amounts of money into furnishings, he was all about the idea of surrounding himself with beautiful objects.

“Designing furniture was a logical step to realize his vision for the new American home,” says David Bagnall, curator and director of interpretation for the Frank Lloyd Wright Trust.

Wright would tell you that his ideas sprang fully formed from his mind, results of his own creative genius. But according to Bagnall, the architect’s early furniture designs, integrated within his Prairie-style masterpieces, were reflective of his ability to synthesize; to take disparate influences and reconstitute them as his own unique creation.

Wright, he says, was a master interpreter. Absorbing the lessons found in international magazines, Japanese crafts, and the Arts and Crafts movement, Wright designed pieces that seemed both similar and singular. His high-back chairs, for instance, have a passing resemblance to the work of Scottish architect and designer Charles Rennie Mackintosh, but Bagnall attributes this to both designers drawing from similar influences.

“I don’t think Wright was looking at one specific person or idea,” he says. “He was drawing on all these resources to shape his ideas.”

Wright’s first experiments with interior design can be found in his home and studio in Oak Park, Illinois, built in 1889, where he began working on built-ins (he would later move his practice there, in 1898, as he racked up more private commissions).

He would transform this Shingle-style home into a early testing ground for the Prairie style, especially the studio, an 1898 addition that came during an apex of early experimentation. Many of these pieces—such as benches in the living rooms—seemed to grow out of the walls, appearing as much architectural as decorative.

A few years later, in 1893, he began designing his own furniture, occasionally working with his assistant, Marion Mahony. He started contracting with several furniture makers in Chicago and Milwaukee during his early Prairie period, since the area was then a center of furniture manufacturing.

He would work quite closely with these fabricators, since Wright’s designs were so forward-thinking and atypical, and required close supervision. His exacting attitude toward craftsmen, Bagnall says, mirrors the feelings he had toward contractors.

“They were groundbreaking pieces, so he needed furniture makers to adapt to his groundbreaking design,” he says. “These pieces helped shape his work, and an entire arc of his career.”

Collaborators included the John W. Ayers Company in Chicago (with whom he’d design pieces for a 1902 exhibition at the Chicago Architecture Club) and the Niedecken-Walbridge Company in Milwaukee.

George Niedecken, co-owner, artisan, and self-styled “interior architect,” would actually go on to work closely with Wright on numerous projects. H even supervised construction on early masterworks such as the 1909 Meyer May house in Grand Rapids, Michigan, and the 1910 Robie House in Chicago, and provided custom furnishings from his factory, which employed more than two dozen artisans.

Wright’s early furniture, greatly influenced by the Arts and Crafts movement, was a leap forward from what most owners and clients owned. Mostly made from oak, they were designed with harmony in mind, offering the same sense of rectangularity found in his homes.

Key examples, such as the heavy oak dining suite from his home and studio in Oak Park, offered an intimate connection to the space; when lined up around the sizable oak table, the tall, high-back chairs formed a sort of screen, a room within a room. Some of the seating at the Robie House contained electrified lanterns, combining seating and lighting in the same object.

These were models and ideas that he’d use throughout his career; iconoclastic work that would continue to stick out. This early work, like his homes, was a great departure from the norm. Even some of his clients had trouble catching up. Early photos of the Robie House show the family’s older, traditional pieces furnishing a handful of rooms, looking dowdy and uncomfortable within the contours and lines of Wright’s interior.

Next Up In Frank Lloyd Wright