Deborah Riley, the show's production designer, discusses the real places that inspired the look of Dragonstone and other key locations

This story was originally published in July 2017.

“If you’re asking an audience to believe in direwolves, dragons, and giants, you need the world to be as believable as possible.”

Production designer and art director Deborah Riley may have one of the most rewarding, and challenging, jobs in television right now: overseeing the set design for Game of Thrones, a series that consistently ups the ante for visuals and fantastic settings.

In recreating Westeros, Riley, who began working on the HBO series during Season 4, has overseen filming in locations across the globe, and created intricate sets for throne rooms and palaces spanning the entire fantasy world. The Australian designer and architect, however, was well trained to create spectacle on a large scale, having worked with Baz Luhrmann during Moulin Rouge and directed the opening ceremonies for the 2000 Sydney Summer Olympics.

“I was 39 when I was first given the job, and probably wasn’t the most obvious choice,” she says. “But working with Baz, as well as Alejandro González Iñárritu on 21 Grams, gave me experiences with visionary ways of approaching filmmaking. And working on the Olympics definitely teaches you to stay sane during the madness.”

To aid in her quest to make the series more believable, she often references real-world architecture as a means of defining different locations (different styles and palettes also make it easier for editors to jump between different storylines that make up the sprawling narrative).

Oftentimes, set-building requires a balance between real-life and visual effects. Shots of the Wall, for instance, blend visual effects with a model made from polystyrene covered in hot wax, while shots of Castle Black are done on a massive stage set built in an Irish quarry.

“When I saw that full-sized, 360-degree shooting set, I thought, ‘these people are crazy,’” she says.

Here are some of the real-world architecture references Riley has turned to during her time on the show to make the elaborate fantasy less foreign, including Dragonstone, Meereen, and the Bank of Braavos.

“They sometimes make fun of me for bringing these modern references into a fantasy world, but I quite like it,” says Riley. 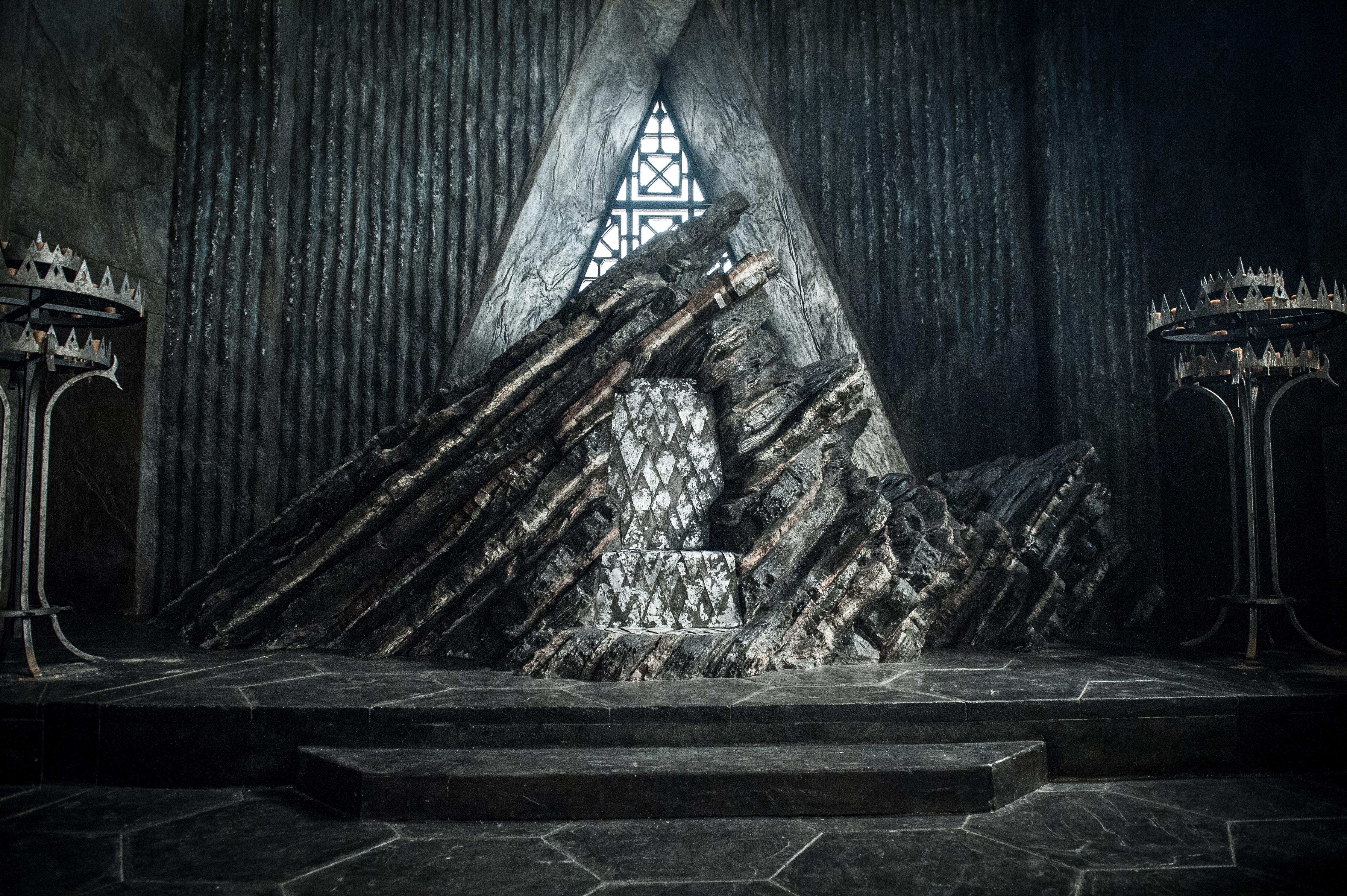 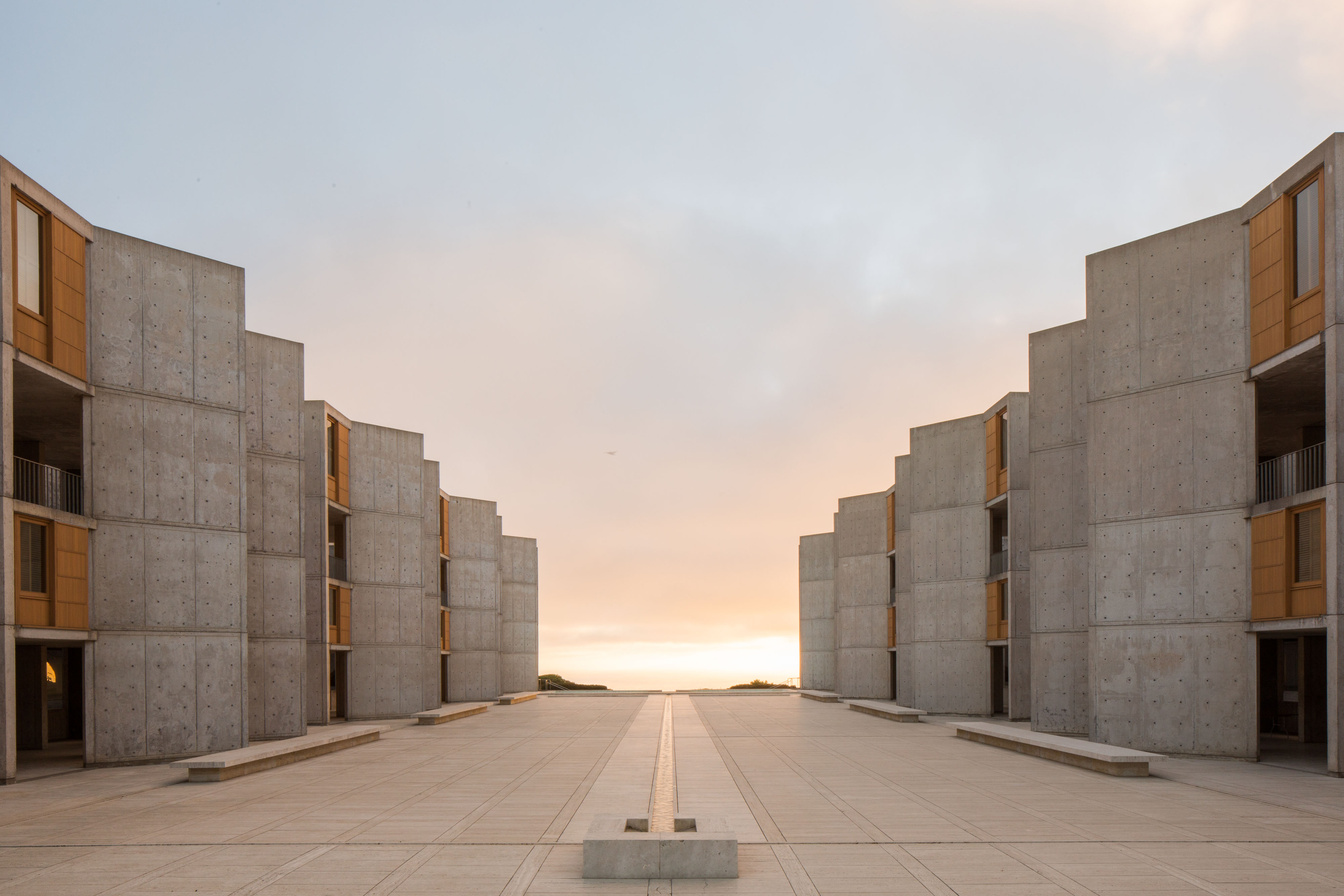 One of the most anticipated settings in the Game of Thrones narrative, Dragonstone, the ancestral home of Daenerys Targaryen, had to pack an emotional punch, says Riley.

“It needed to feel like home in a way that was very deep and meaningful, and needed to carry a lot of psychological weight,” she says.

Riley and her team accomplished that by designing a set that conveys a respect for nature. The exterior of the castle, and the beach where Daenerys makes landfall in an emotional reunion with her ancestral homeland, was filmed at Muaya Beach in the Basque country of Spain.

It’s a setting of incredible beauty and geological significance, with graphic and stunning rock formations. The set designers took the very rock and soil of that setting to inform the stark, powerful interior (quite literally, since they took casts of the rock and geologic formations to create patterns inside the throne room).

The interior set was built and filmed in Belfast, Northern Ireland, with a look that reflected the geology of the place itself. Riley wanted to marry the interior and exterior, having the chambers begin as a cave and rise to a much grander, more inspirational space. This is where the architectural influences came in, including sacred spaces such as the Choir of Notre Dame Church in France and Louis Kahn’s famous Salk Institute, especially the iconic perspective shot that shows the scale of Kahn’s creation.

“When you see Dany arrive, it’s quite an emotional moment for her, the same way walking into a cathedral is awe-inspiring,” she says. “I love the idea that it was a strong and powerful space, and that architecture can convey that.”

The floor of the throne room chamber contains a sigil, designed by the graphics team to be an ancient version of the familiar Targaryen symbol as well as a reference to the Northern Ireland landscape. The hexagonal tiles recall the famous Giant’s Causeway, a famous formation of basalt columns on the country’s coastline. 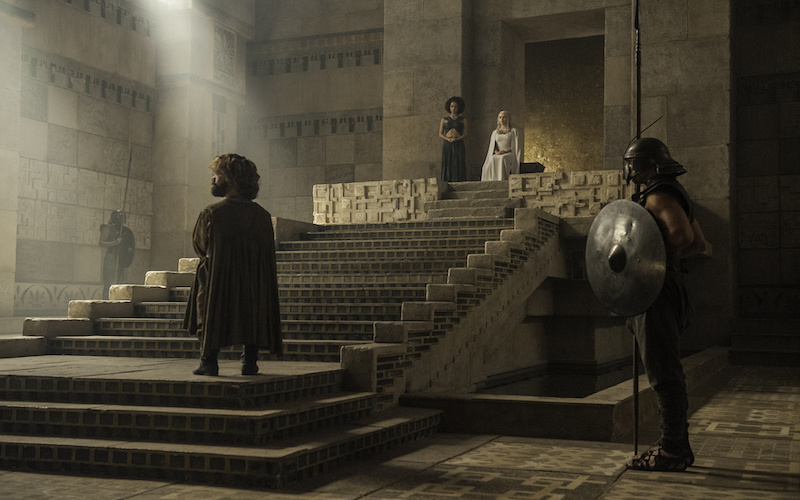 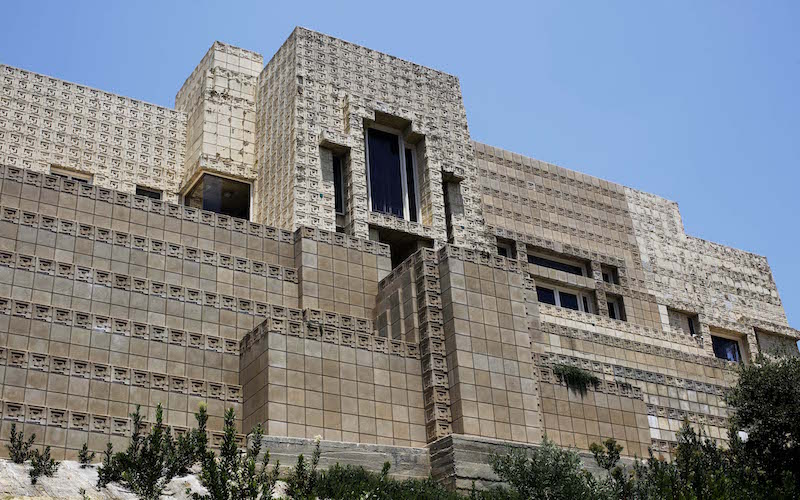 "I think Frank Lloyd Wright’s Mayan Revival period was a huge influence on Meereen and Daenerys’s world. The great thing about his work during this particular time is that these buildings have a certain domesticity to them, but they also felt sort of monolithic and ancient at the same time. There’s a sense they could be inside a pyramid. You understand that people could actually live there.

“That was key to us figuring out how to design Dany’s penthouse, for instance. How could it feel like it was inside a pyramid, but also a place someone would be comfortable living in? I’m here in Los Angeles, so I referenced the Hollyhock House and the Ennis House. It’s a television show, so we need to work incredibly fast. I tend to lock on references incredibly quickly. I’m grateful to come from an architecture background to understand how architecture shapes civilizations.” 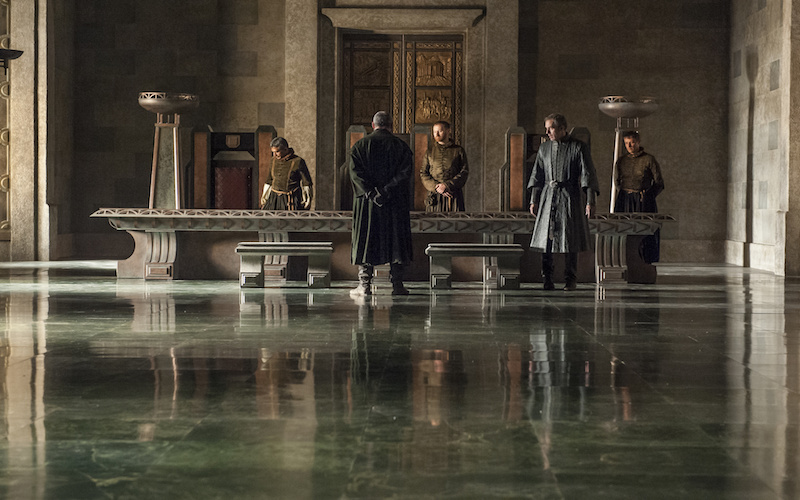 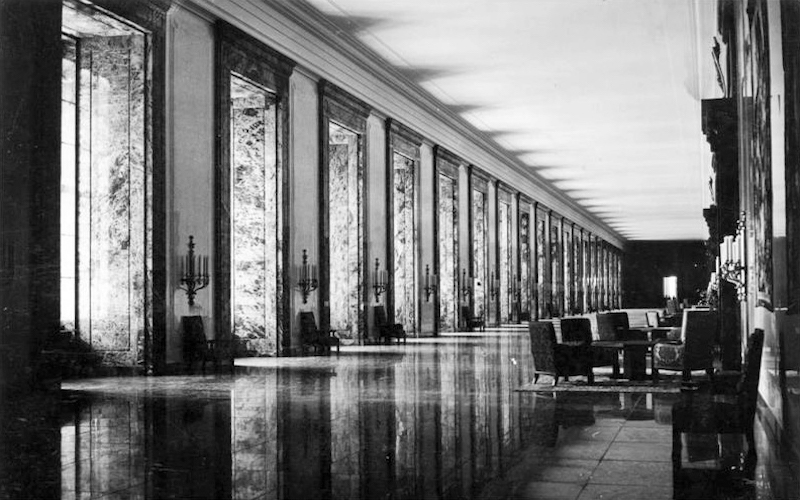 Bank of Braavos: Albert Speer’s architecture for the Third Reich

"David and Dan (David Benioff and D.B. Weiss), the two showrunners, wanted something that conveyed the wealth and power of the bank. The question was how to bring the intimidation of Albert Speer’s architecture into the world of these bankers. I think it worked perfectly. The design also established a much different aesthetic from King’s Landing, and the very Mediterranean architecture that had been established in the show.

“There was one long corridor Speer did, and the general takeaway lesson from his work was scale. It was just absolute scale, and a great sense of the psychology of space. That really fascinates me; it was an immediate manipulation right from the start. It was very well played, something that we tried to adopt. The great thing about these scenes in the Iron Bank is that you immediately understand who’s in control.

“There’s no set dressing, nothing on that big table. It’s very deliberate as well. Parchment and quill were sitting off stage in case they were needed, but I wanted to make it about discipline in a very extreme fashion. It’s a very visual sense of power. I like that idea of manipulation, and who’s in control." 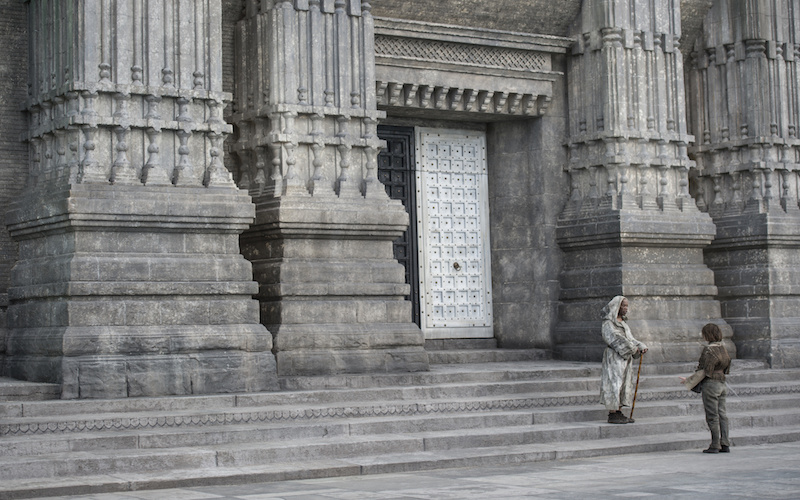 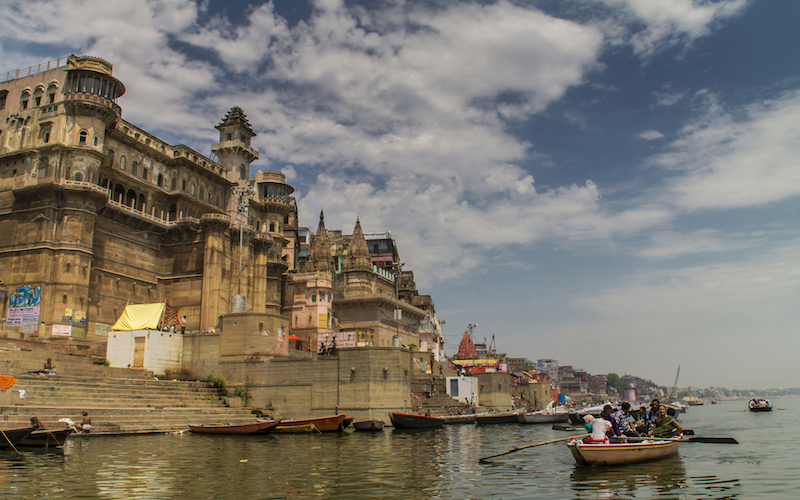 "For the exterior of the building, David and Dan described it as a building that would have one door and no windows, and be the home of the Many-Faced God and the Faceless Men. Arya has no idea what's inside. When she arrives, she would have no clue what was there, so the building has to be faceless as well. I was looking at Varanasi on the bank of the Ganges, and how those buildings rise out of the water.

“For the Hall of Faces, I was looking at the Ellora Caves in Western India, how ancient the carvings were, how incredibly intricate the stonework was. There’s also a temple in Hong Kong called the Temple of 1,000 Buddhas, which has literally a thousand Buddhas. So if you lay those two things atop each other, you literally have the Hall of Faces. I wanted the faces to be a part of the building, not like a library. You can’t let logic get in the way of your brain sometimes. We started thinking about how they would get to all the faces and find them, but then that got into a layer of specificity that got in the way of the shot. We were layering ladders, and just went with it as is, which is a much stronger image.

“When we shot it, we had 600 prosthetic faces on display, with varying degrees of detail. Some were extraordinary detailed. Contained within the set were the faces of our producers; the face of the lady that Arya touches is the face of the mother of the head of the prosthetics department. Many people dedicated their faces to that set." 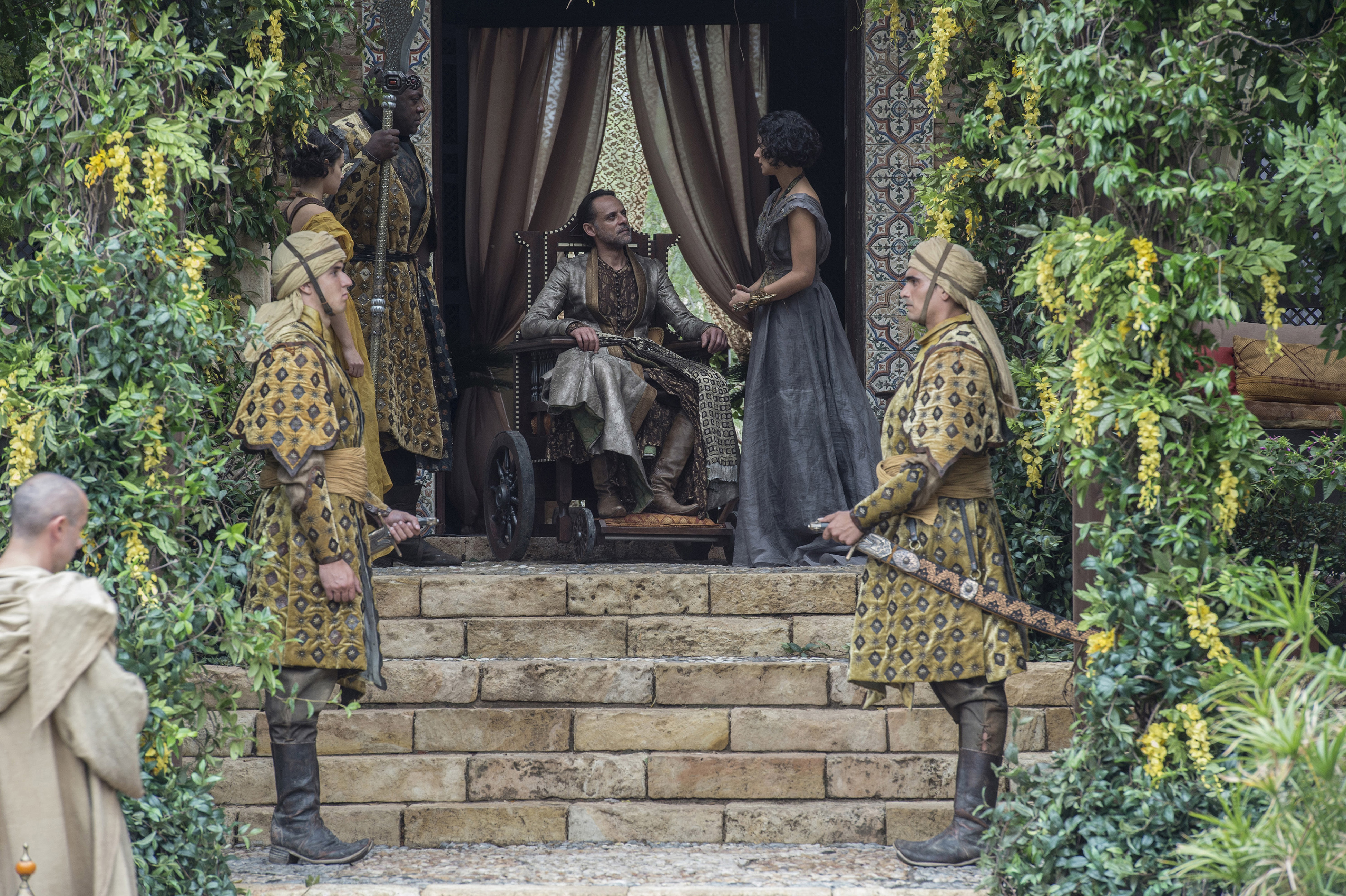 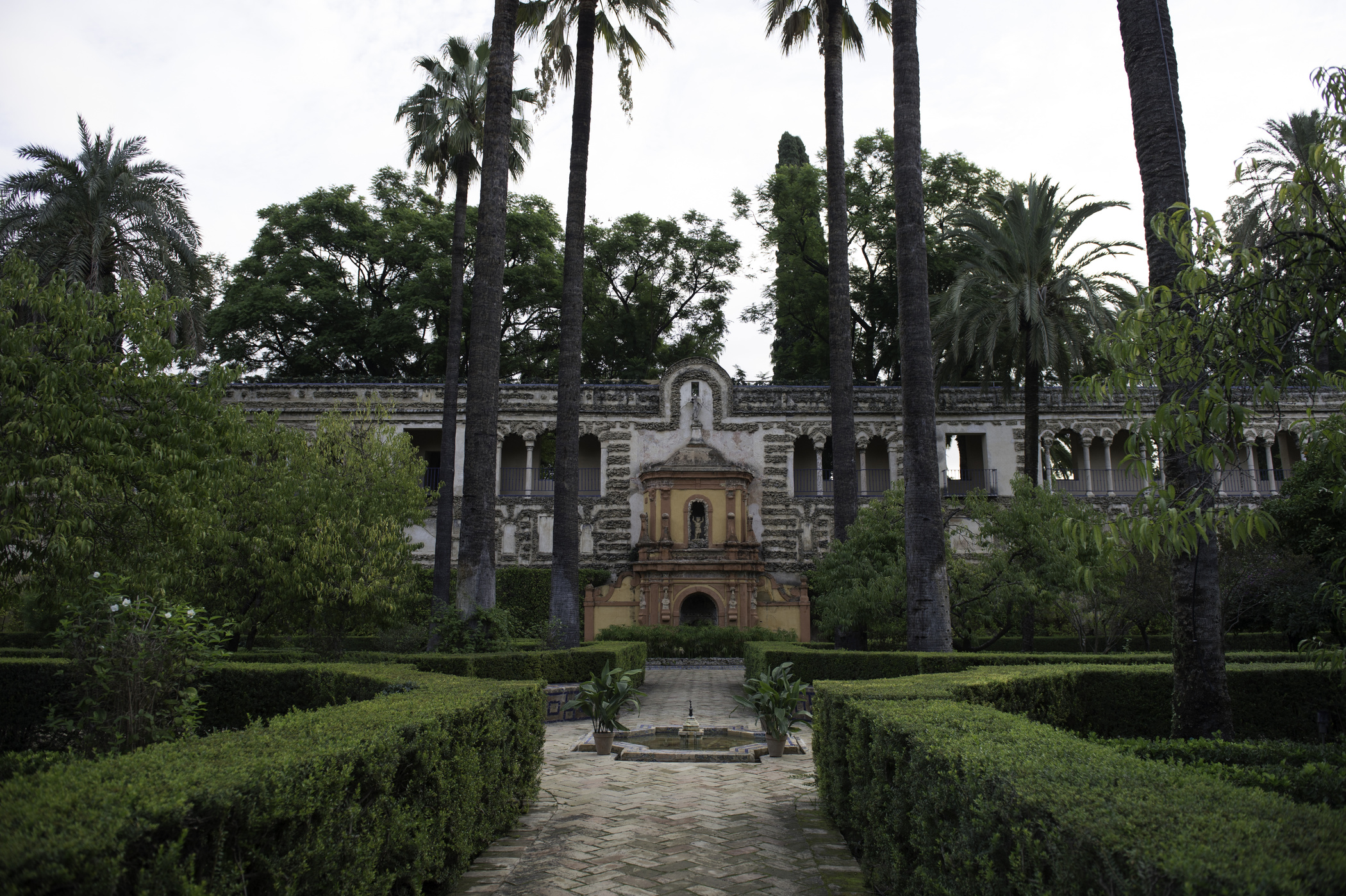 HBO and Macall B. Polay/HBO

"The great thing about using the Real Alcázar was that I had been there before as a tourist. I had been there many, many years before. Who would have thought I’d be shooting there years later? The fact that they let us shoot there was incredible. They shut down parts of the castle when we needed it. One of the wonderful things I’ll take away from the show is walking through those gardens on the way to work in the morning.

“Everything has to be very well thought out before we shoot there; we’re entrusted with such an incredible site. We have to have it all approved, and won’t mark or harm the original building in any way. It’s like when we shot at Diocletian's Palace. It’s an ancient Roman ruin that we have to respect, but at the same time, for us, it’s dragon daycare. But these settings provide the kind of reality we couldn’t get any other way. It’s such an enormous privilege to shoot at these UNESCO Heritage sites. It's incredible."

Next Up In Film and Television